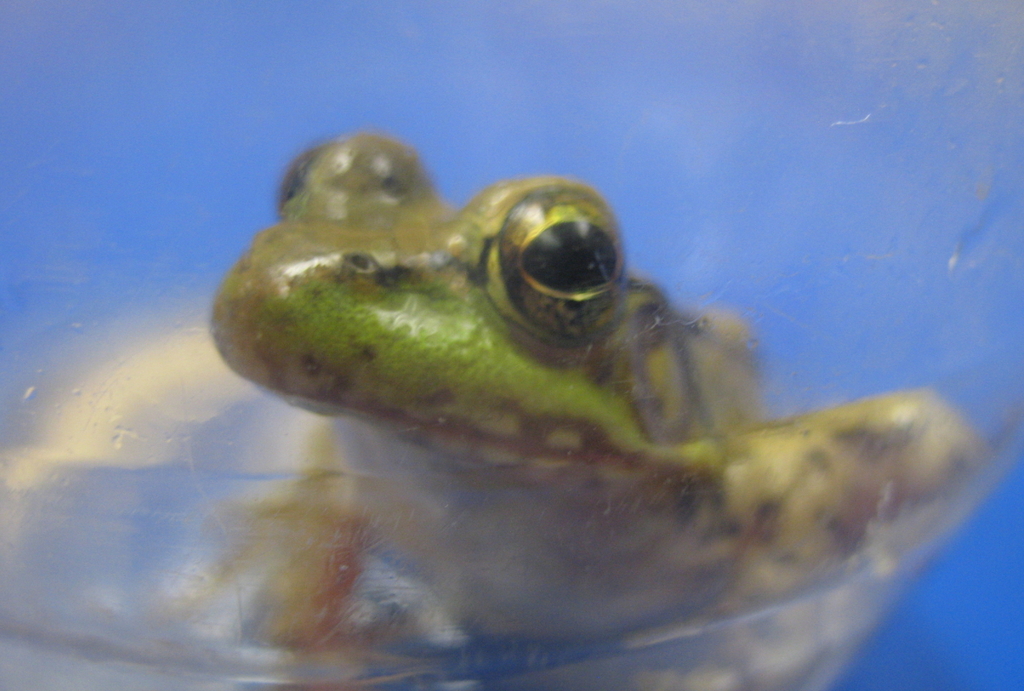 This Thursday in Nature Club we learned about the frogs and toads that live in Harrison County.  Here's a bit of trivia for you:  all toads are frogs, but not all frogs are toads.  Read on to learn how to identify them.  There aren't too many, so it's not hard to learn!  Disclaimer: I am not a herpetologist, I just play one at the library.  Follow the links if you'd like to read more on the Indiana DNR's webpage and listen to the frogs' songs.

There are four groups to learn:

1. Northern Cricket Frog, Acris crepitans--A tiny (up to 1.5"), warty, bright green and brown frog.  Look for the dark triangle between its eyes to ID it.  Song: Like a cricket, or the metal balls in a spray can clinking together when you shake it. 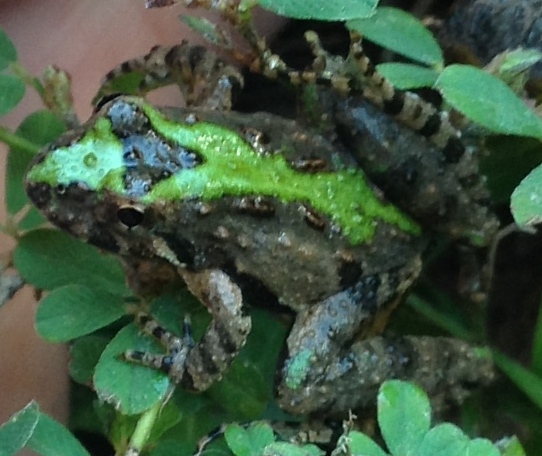 2. Spring Peeper, Pseudacris crucifer--A tiny (up to 1.5"), smooth, tan frog.  Look for the brown X on its back to verify ID.  The spring peeper is actually a type of chorus frog.  Song: A loud peeping like chicks.  Tip: These are already singing, so sit outside on a warm, wet night and see if you can hear them. 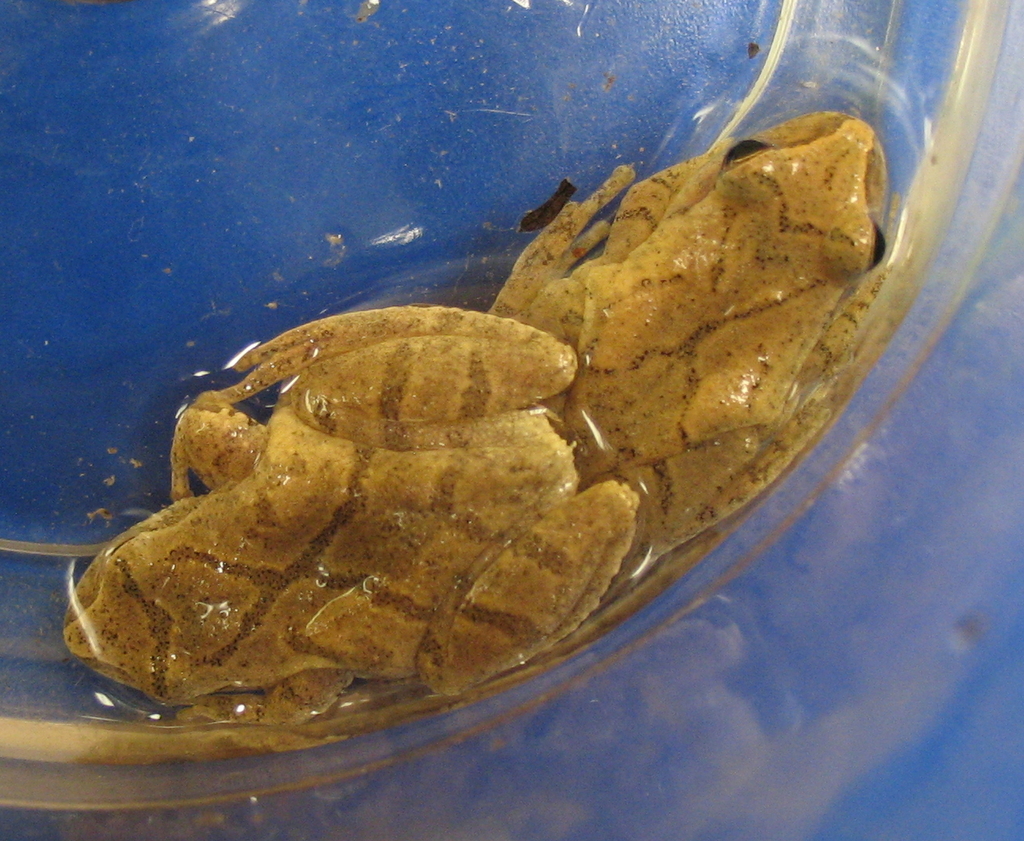 3. Western or Striped Chorus Frog, Pseudacris triseriata--A tiny (up to 1.5"), smooth, tan frog.  Look for the brown stripes through its eye and down its back and sides to ID.  Song: Prrrrt!  A loud trill like a finger running over the teeth of a plastic comb.  Tip: These are also singing.  I have had best luck finding them in roadside ditches or puddles left behind by tractor tires. 4. Cope's Gray Tree Frog, Hyla chrysoscelis--A mid-sized (1.25"-2") tree frog.  Can be white, gray, or bright green depending on what it's sitting on--it changes color like a chameleon but not as quickly.  Look for the round, sticky toe pads--this animal is what you probably picture when you think tree frog.  It has bright yellow patches under its thighs, which frighten predators as it leaps away.  Song: A short, loud, flute-like trilling.

*Photo by Fredlyfish4 from Wikipedia

1. Wood Frog, Lithobates sylvaticus--A mid-sized (1 3/8"-2 3/4") brown or pinkish frog.  Look for the dark mask on its eyes to ID it.  As its name suggests, it spends most of its time in the woods and comes to ponds to breed.  Song: Like a duck quacking.  Tip: These started breeding in February, so you may still get lucky if you visit a pond at night. 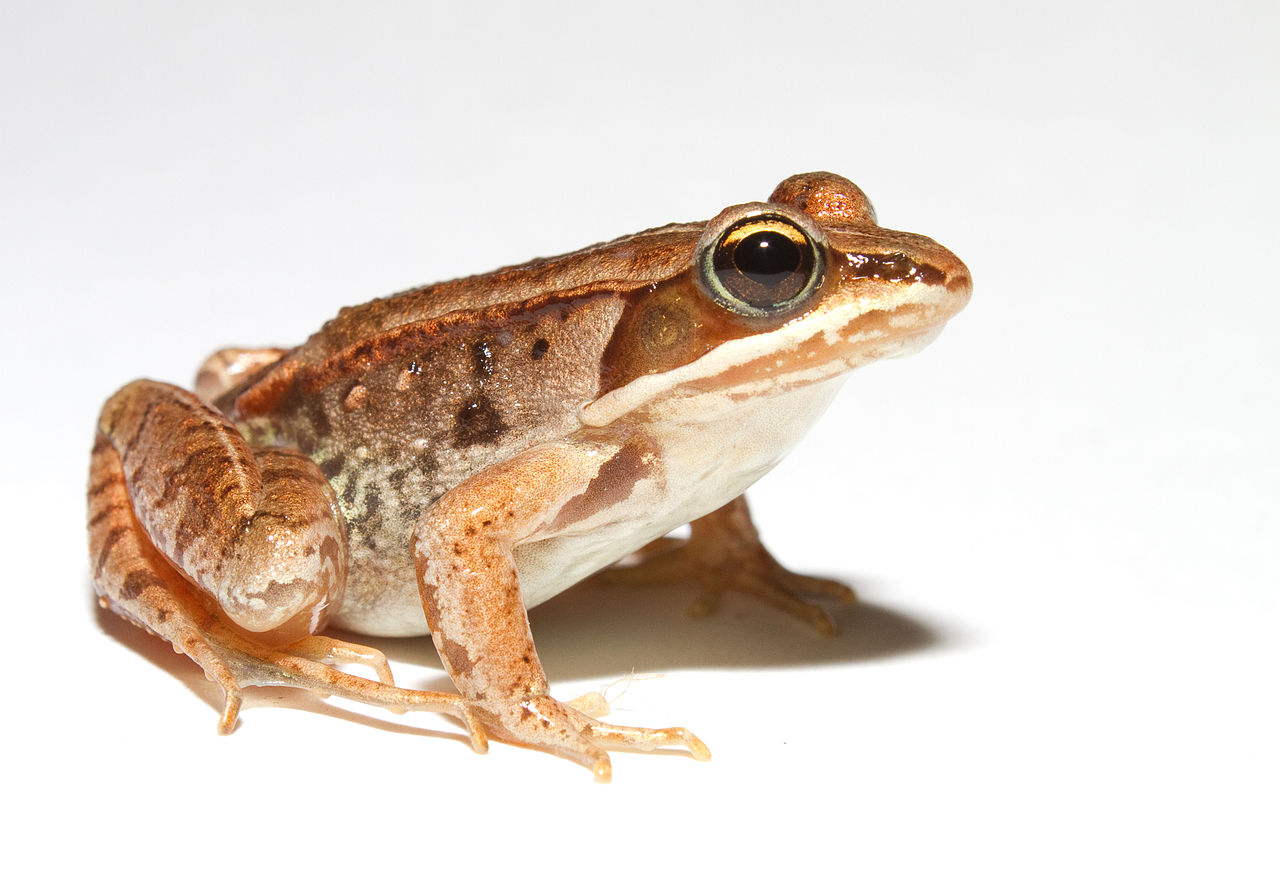 *Photo by Brian Gratwicke from Wikipedia

2. Southern Leopard Frog, Lithobates sphenocephalus--A large (2"-3.5") green frog with dark brown spots down its back.  Unlike the wood frog, it lives in and around water.  Song: Chuckling, or like a finger rubbing a balloon.  Sounds very similar to the wood frog, so be careful making an ID! 3. Pickerel Frog, Lithobates palustris--A mid-sized (1.25"-3") green or brown frog with dark brown squares in neat rows down its back.  The pickerel is a type of leopard frog.  Song: A long, quiet snore.

*Photo by Brian Gratwicke on Wikipedia

4. Northern Green Frog, Lithobates clamitans--A large (2.25"-3.5") green or brown frog.  It may have gray mottling on its back, but it will not have the bold brown spots of the leopard frog.  To tell the green frog from the bullfrog, look for the ridge running from its eye, around its eardrum, and down its sides--the bullfrog doesn't have this dorsolateral ridge.  Song: Like a plucked banjo string. 5. American Bullfrog, Lithobates catesbianus--A giant (3.5"-6") green or brown frog.  Like the green frog, it can have gray mottling, but it will not have the dorsolateral ridge--just a small ridge wrapping around its eardrum.  To tell males and females apart, look at the eardrum (tympanum).  A female's tympanum will be the same size as her eyes, while a male's will be larger.  This also works for green frogs, but not for the other species.  Song: A low roar like a bull or a foghorn. 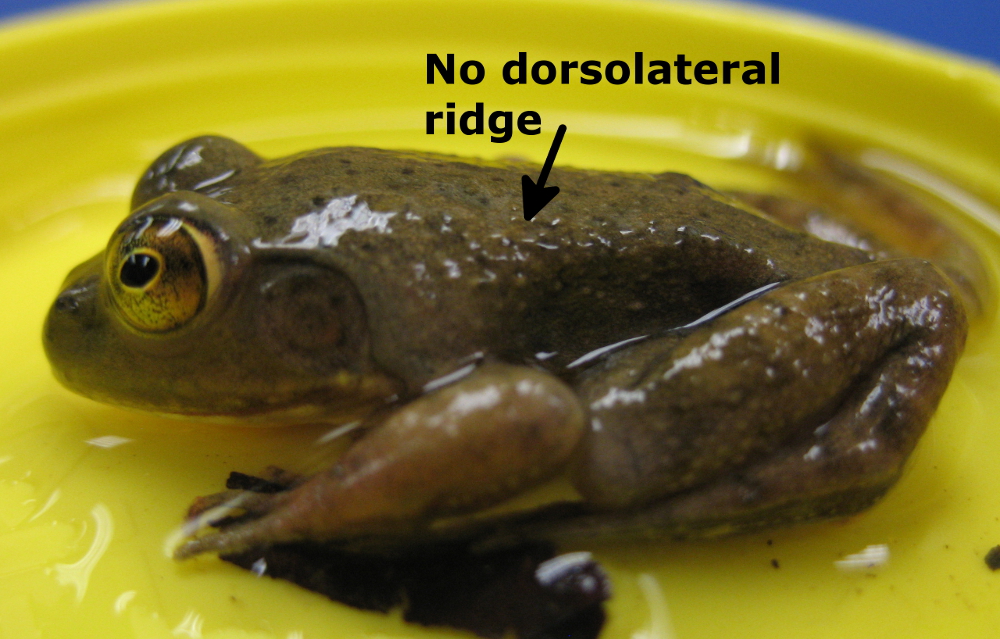 6. Crawfish Frog, Lithobates areolatus--Rather large and spotty.  The crawfish frog is endangered in Indiana due to prairie destruction, so you are unlikely to encounter one.

*Photo by Stanley Trauth from Wikipedia

1. American Toad, Anaxyrus americanus--Your typical garden toad, gray and warty.  To verify ID, count the warts!  An American toad only has 1-2 warts on each of its dark spots.  Song: A 20-second long musical trill like a ringing telephone.  Tip--these are already singing, so go out at night and listen! 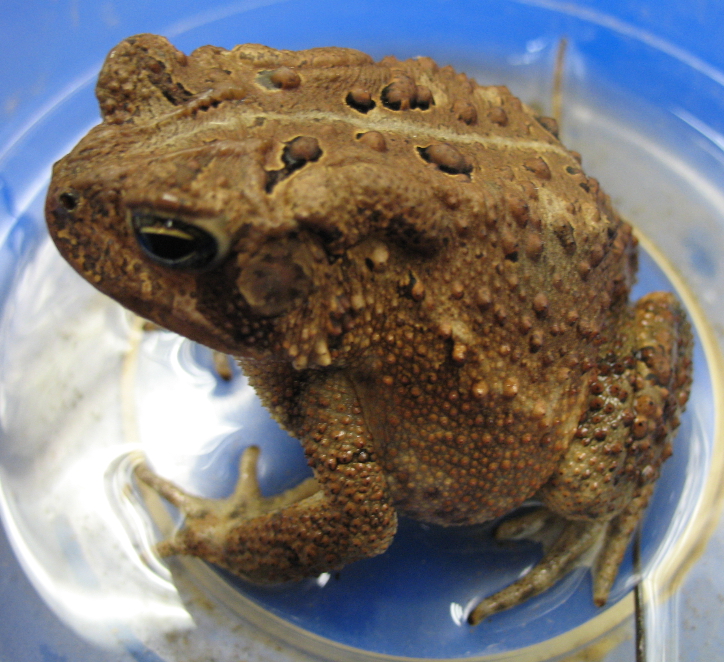 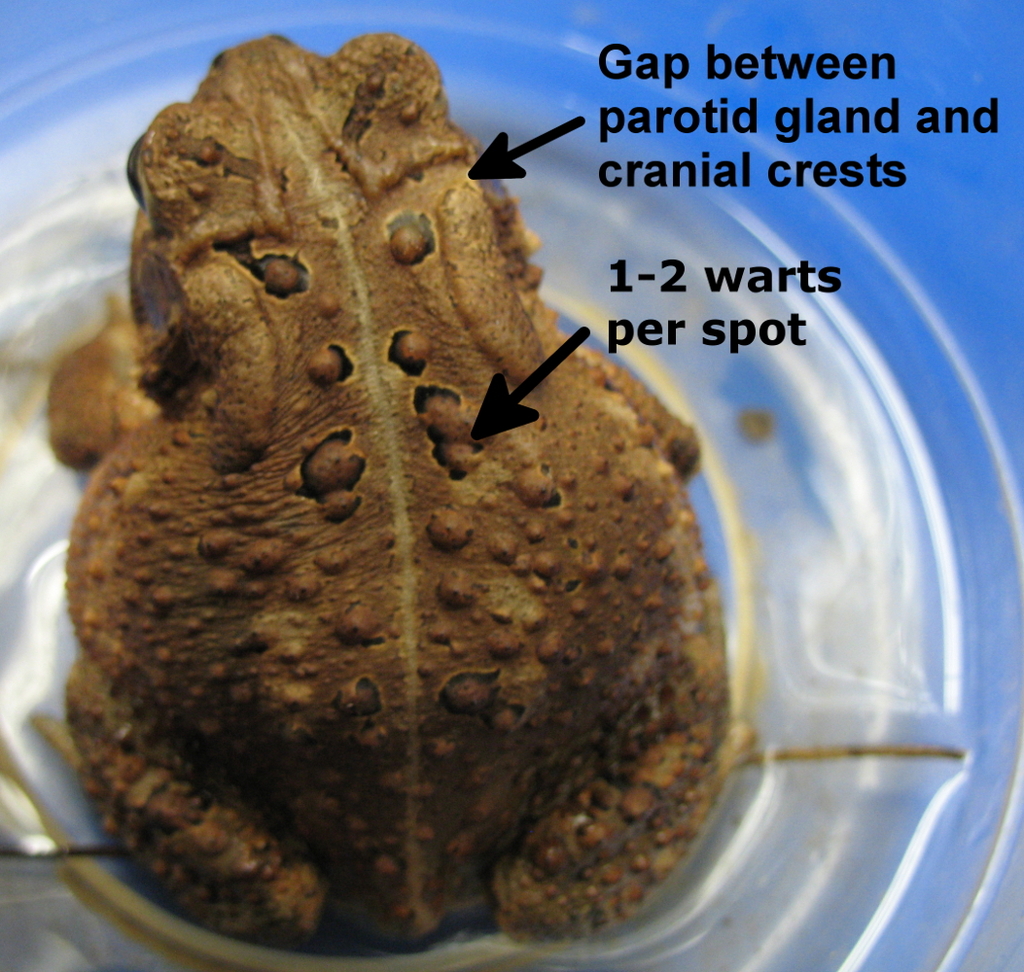 2. Fowler's Toad, Anaxyrus fowleri--Did you know we have two toads?  The Fowler's looks almost identical to the American toad.  Count the warts to tell the difference.  Fowler's toads have larger dark spots than Americans, so that 3-5 warts can fit inside each spot.  Song: A short, frantic trill like a lifeguard whistle: "Waaaaaaah!"  Tip: These aren't singing yet, but try on a nice summer night and see if you can pick out their songs from the Americans'. 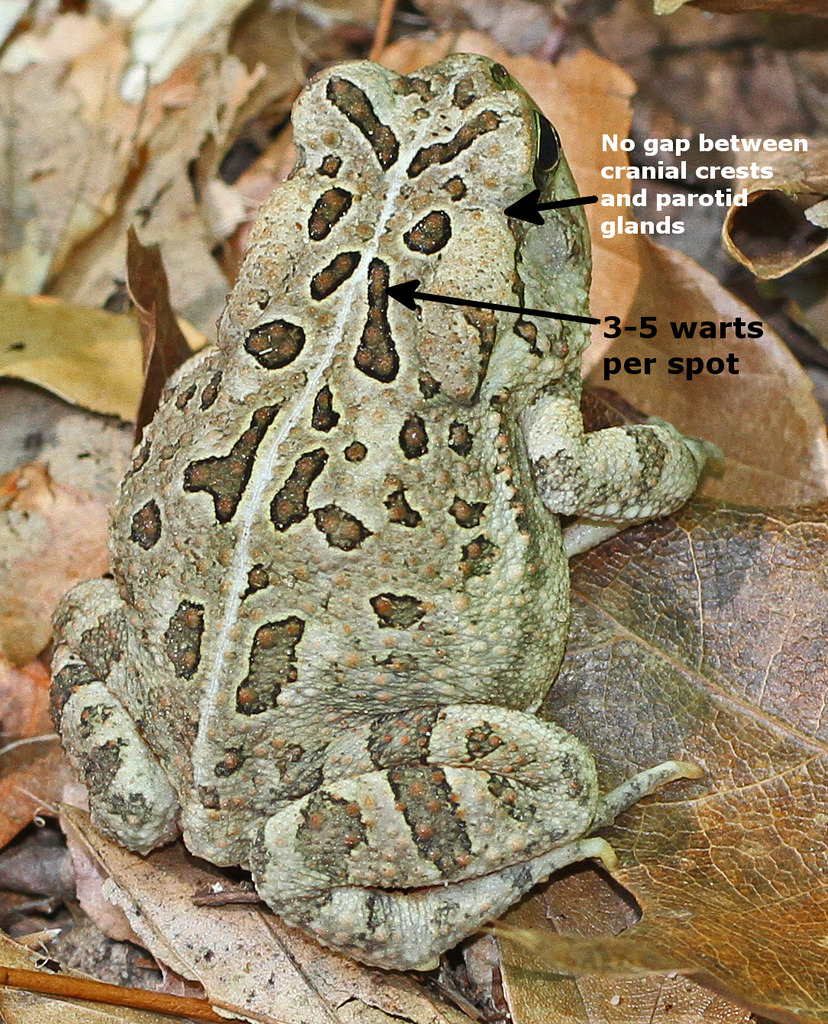 *Photo by Judy Gallagher from Wikipedia

1. Eastern Spadefoot Toad, Scaphiophus holbrooki--This toad is smaller and smoother than the true toads, with large eyes and a rather cute appearance!  Due to prairie destruction, Harrison County's barrens are the only places in Indiana where you can still find this endangered animal.  However, it spends most of its life in a semi-hibernation underground, so you are unlikely to find one.

Spotted Salamander--These guys were breeding by the hundreds at the same time as the wood frogs.  Unfortunately, since they spend most of their time underground in burrows, you will probably only see them the one week of the year when they visit a pond to mate. 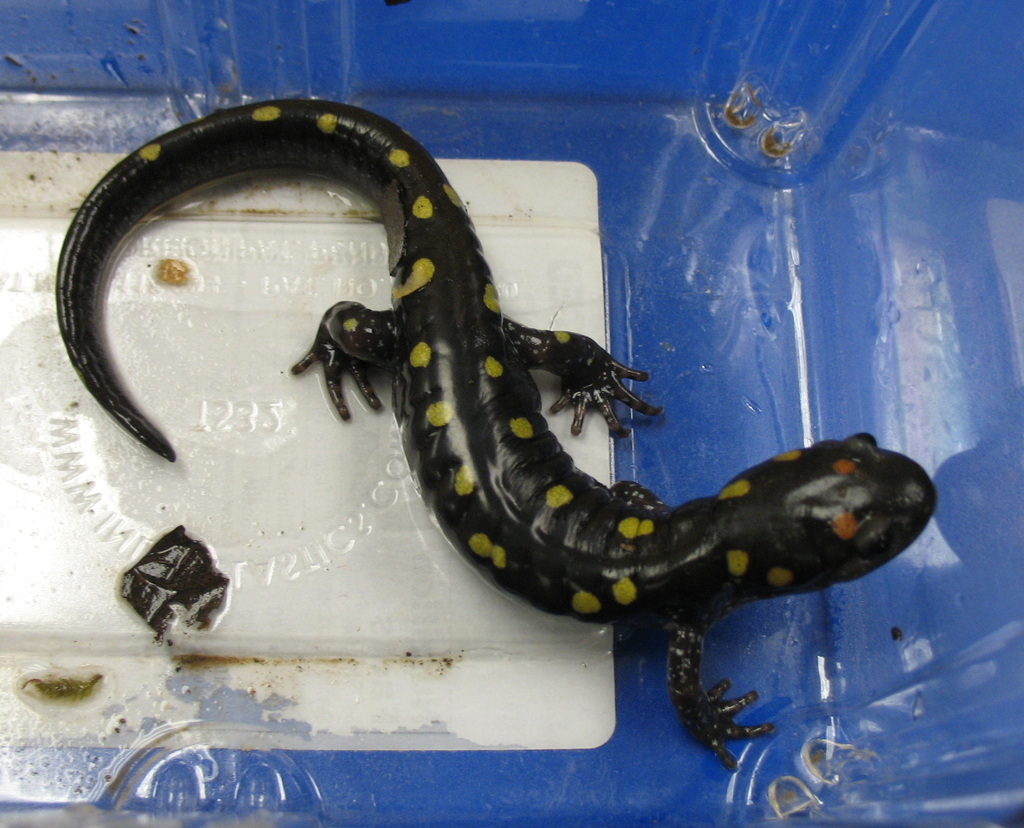 Eastern (Red-spotted) Newt--These live in the pond feasting on frog and salamander eggs.  They remind me of tiny alligators!  You may have seen their "teenage" form when you were out on a hike--the poisonous Red Eft. 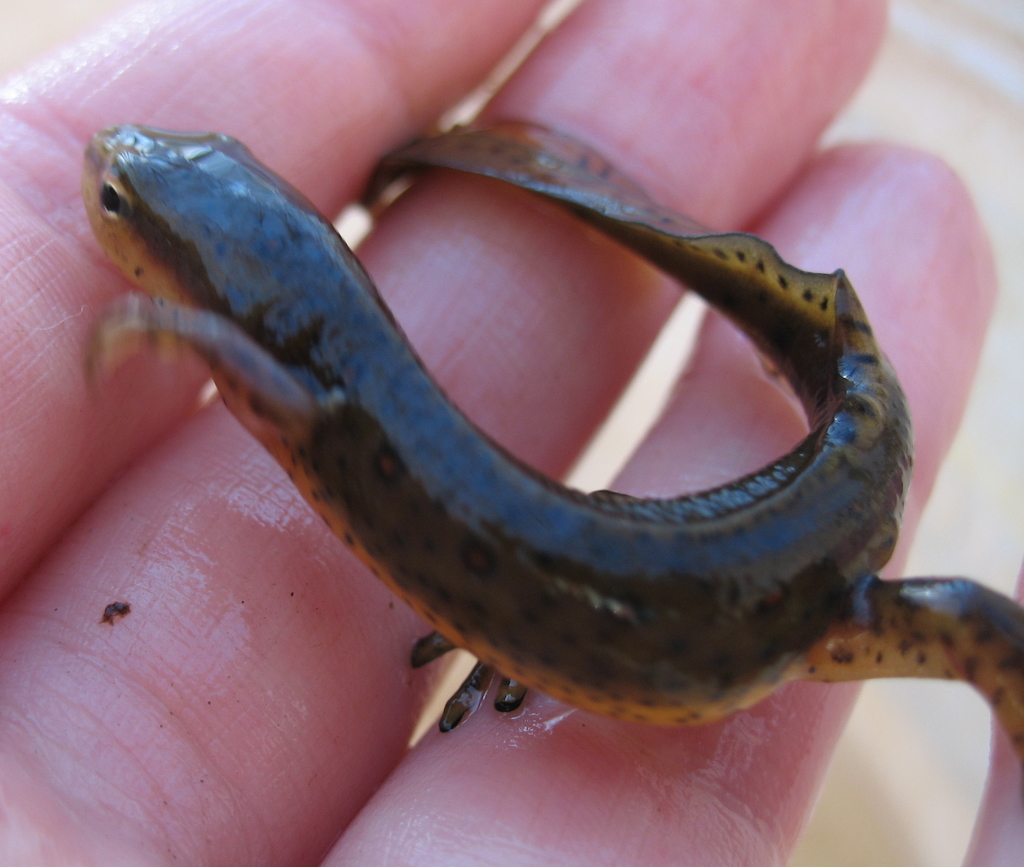 Nature Club, for children in 1st grade and up, meets monthly on Thursdays at 4 PM.  Visit this link to see our current schedule and sign up!

Springtime nature tips for the family

You need to be a member of Harrison County Public Library to add comments!